“A Night for Beirut” took place at the Public Records Garden in Brooklyn on Sept. 9, just over a month after an explosion destroyed the Port of Beirut on Aug. 4. We spoke to Alfred Bridi who, alongside his partner Caroline Newton, organized three screenings of six short films to raise funds for Lebanese artists affected by the blast. All told, the event raised $1,200, which was distributed through two charities, Haven for Artists and The Beirut Musicians Fund.

NNY: Tell me a little bit about yourself.

Bridi: I’m Lebanese-Iranian, and I grew up in the U.S. and Europe. I moved to Beirut when I was 28, actually, and lived there for two years. My dad is very Lebanese, but he left Lebanon when he was 19 during the civil war. I initially got to know Lebanon through his nostalgia. My mom is Iranian, and growing up I was very embedded in the Persian community in Washington D.C. I’ve been working at the International Rescue Committee as an attorney for some time, and I just started working with the Biden campaign on voter protection in Florida.

I’m a bassist. I have been playing music for a long time. Because I moved around a lot, it’s hard to stay in a band. When I was in Lebanon, I started DJing because I figured it’s easier to move USB sticks than instruments.

How did the fundraiser come together?

Caroline connected with Public Records through some of her performance work which they show. We only started a week ago, they were planning another screening which fell through. The director called her and said, “I know you’ve been doing a lot of performance stuff. Would you want to put something together?” and added that they had been wanting to support Beirut. The three of us got on a call, started throwing ideas back and forth and the following day we had a proposal.

And this all happened in the past week?

Within five days. We got all the videos, and pitched them a program and said, “This is 80% confirmed, what do you think?” And they said, “Dope. We’ll let you run with what you think.”

How did you choose which movies to screen?

One thing that we were trying to do was find a range of styles and voices and tones. The mix of the six films is pretty eclectic, ranging from the one about Anya, the Lebanese-American drag queen, to Yabandjo, which is about the Armenian ethnic minority. We also had a music video in there and another couple of shorts.

We wanted to show that Lebanon is not just Beirut, it’s not just Muslims and Christians. There are communities there that have different histories and speak different languages. Combined with the other films, I thought it was an interesting contrast to the music video and all that stuff. We were really fortunate to have a music video that was filmed at the port.

The filmmakers live all over the world. It was incredible that they responded immediately with, “Absolutely, we want to help.”

Has your contact with other members of the large Lebanese diaspora community increased since the explosion?

Absolutely. We’ve made WhatsApp groups for Beirut New Yorkers and I’ve been in touch a lot more with my family back in Lebanon. Trying to connect with people doing stuff here, trying to donate, organize. We’ve been a lot more active. There is a lot of longing to be there and help, but we can’t, so we can try to help from here.

It’s also so encouraging that people in New York and people from Lebanon really show up. You can tell someone about an event three days before it happens, and they really come through and make it work, regardless. That’s what happened here, and I think it’s really beautiful. It feels really empowering.

Are you planning on organizing anything else for the same cause?

I would like to. It was really cool that this sold out, and a lot of people were asking us about how to get in. That was amazing to me because there’s clearly a lot of demand. And there’s so much talent and so much production coming out of these communities.

This was by no means a monumental gesture or anything, but it felt more rewarding than posting and resharing on Instagram. Not that that isn’t important, of course.

What I loved about last night was it wasn’t just Lebanese people. New Yorkers, Mexicans, Venezuelans, Palestinians. That’s what I love about the films as well, some are Lebanese films, some are diaspora films. That’s what solidarity is about. 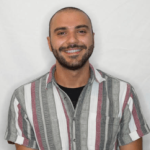