New York City has so far avoided a crush of coronavirus-related evictions, filing data shows. However, housing court statistics also indicate that the pandemic has affected eviction cases in other ways and that a crisis may still be on the horizon.

In March, Gov. Andrew Cuomo paused housing court and issued a sweeping statewide eviction moratorium to prevent potentially crushing evictions on a mass scale. After housing courts reopened on June 20, the moratorium remained in place until Oct. 1. According to the New York University Furman Center for Real Estate and Urban Policy, just under 10,000 non-public housing eviction cases were filed between June and September, a significant drop from the 38,000 experts would expect in a normal year.

“The question becomes, what is the outcome going to be once things start to lift up?” says Ryan Bremmer, a research analyst at the Furman Center.

Cuomo issued a new eviction moratorium on Sept. 28 as the old one expired, however housing advocates say it doesn’t go far enough. One concern is that documentation requirements to show a pandemic-related job loss will exclude many vulnerable tenants.

“The fear has always been the avalanche of filings,” says Bremmer. “Now, as we’re chipping away at certain protections, we’re watching to see what is going to happen.”

Eviction cases are a fraction of what they were 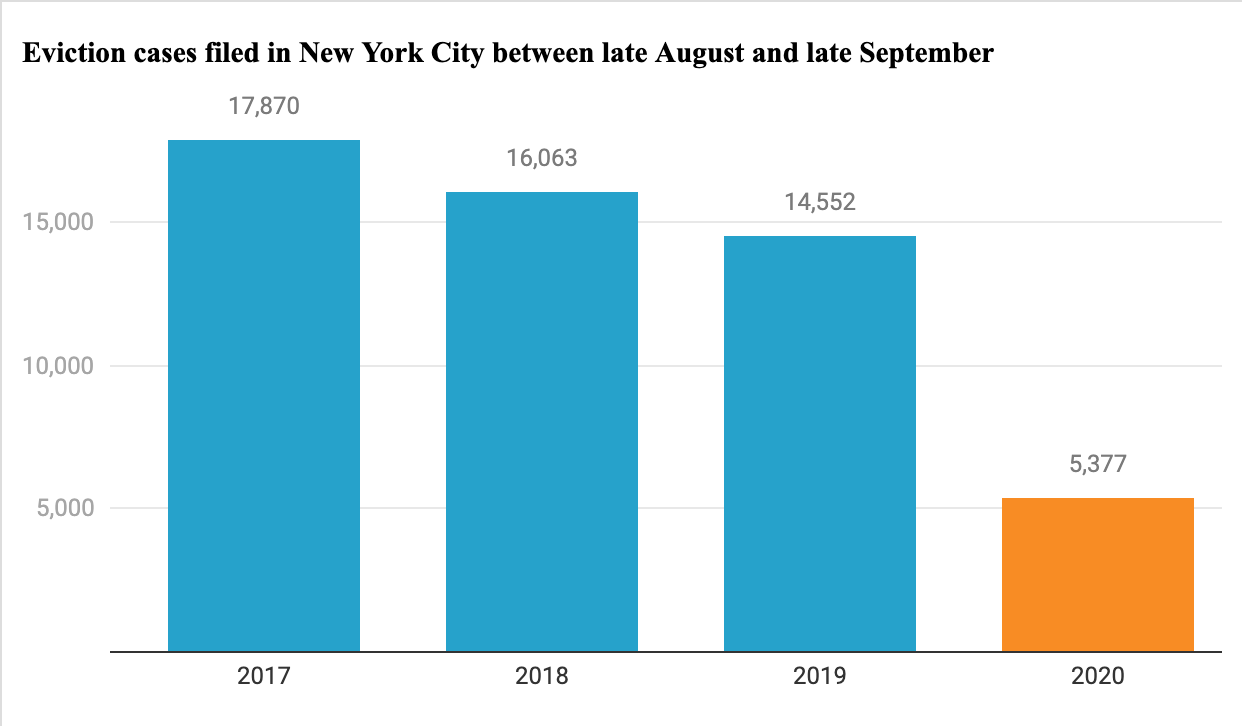 New York City eviction filings in September were barely one-third of those submitted during similar time periods in previous years. The indefinite nature of the pandemic might be an even more important factor than any one policy, Bremmer says.

“It may be that the policy is working, but it also may be people are waiting to file when they know more about what will happen,” he says.

Landlords are seeking a larger amount of unpaid rent 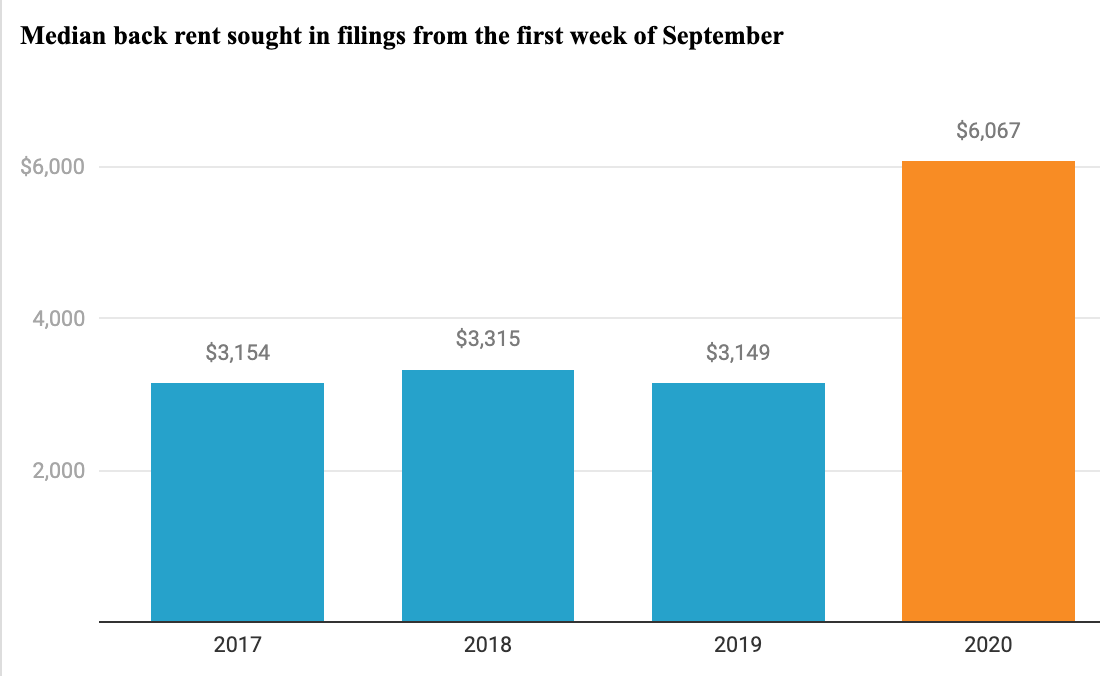 Filings in 2020 have seen a substantial increase in weekly median amounts sought in individual cases. The Furman Center is not sure what is driving this trend. First, the pandemic and economic downturn could be affecting higher-income tenants and therefore bringing larger rents than previously seen to the city’s housing courts. Second, landlords seeking smaller amounts could be avoiding the costs of housing court until it’s absolutely necessary. 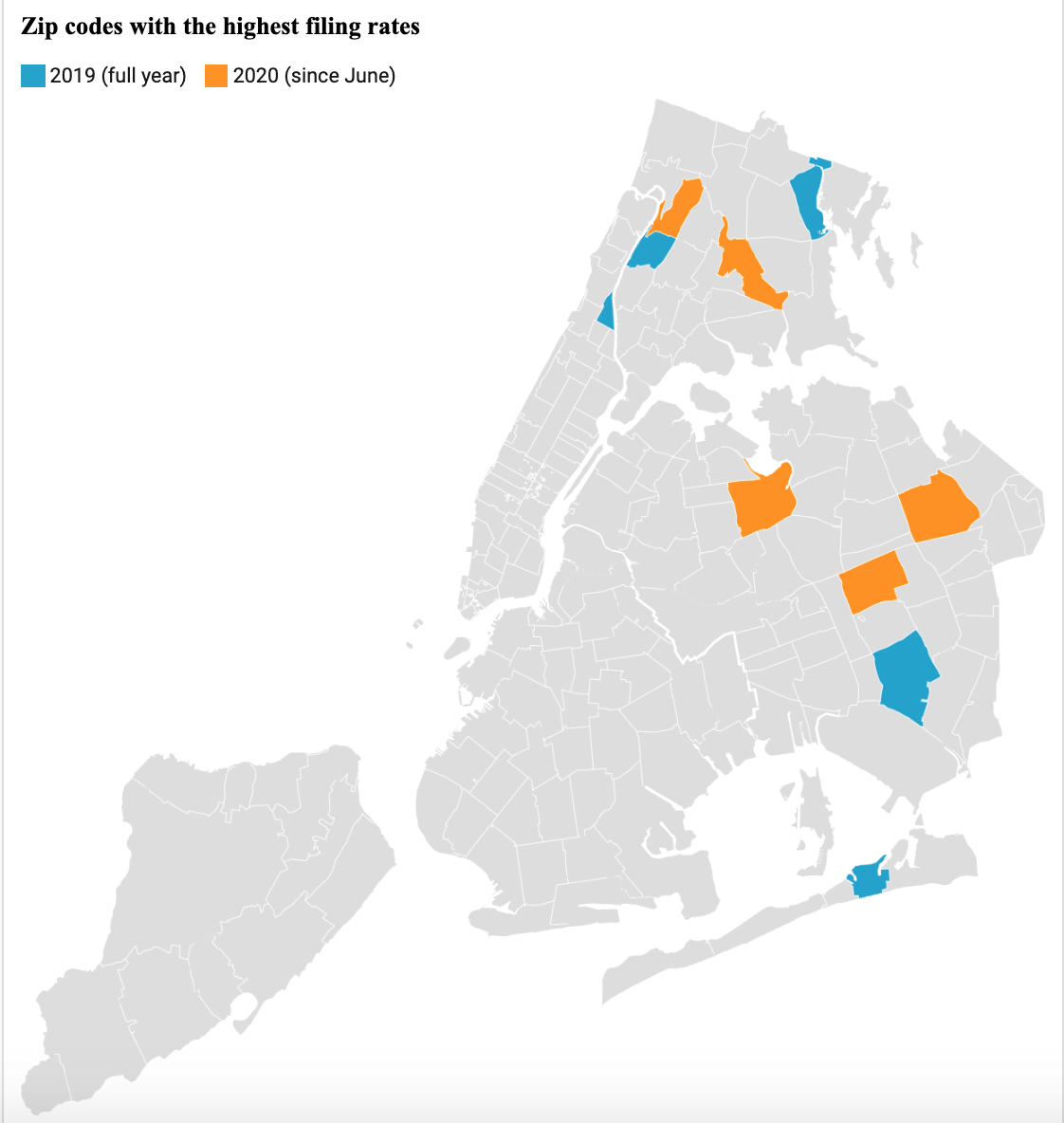 Since eviction filings are so low, all New York City zip codes are well below their 2019 eviction case rate, or filings per 100 private units. However, since the housing court restart, the zip codes with the highest rate of filings were not the top zip codes from 2019. For example, the Corona neighborhood in Queens, which was hit particularly hard by COVID, has the highest rate, 3.1%, and total number of cases, 645, overall this year, but did not rank at the top last year. The zip codes currently with the highest case rates tend to have more small rental buildings, Brenner notes.

“Most filings in a normal year come from much larger buildings,” he says, indicating that small building owners might be feeling the most financial pressure to file now.