POLL WORKERS ON THE CORNER OF SULLIVAN AND HOUSTON. PHOTOS BY AVERY SCHUYLER NUNN.

Early Tuesday morning, poll workers at the Church of St. Anthony of Padua prepared for a rush that paralleled that of the early-voting days. But as people walked by and volunteers asked whether or not they were there to vote, the majority responded that they already had.

“Earlier this week, there were lines down the street almost every day for early voting,” says Audrey Thomas, a native New Yorker and polling volunteer at the church, located on the corner of Houston and Sullivan streets.

“I had to wait for FOUR hours around that corner!” chimes volunteer Jack Manuel, pointing down the block.

Before the sun even rose the morning of Election Day, in-person voters were already on their way out from the polls at the SoHo church.

The volunteers awoke this morning from anywhere between 3 a.m. and  4:30 a.m., some from election stress and nerves, some just to make sure they had enough time to make it to the church before first light.

“Around 5:30 this morning is when the big line hit,” continues Thomas, “but it was nowhere near as long as it has been earlier this week. By about 6:20, the line had already dwindled.” 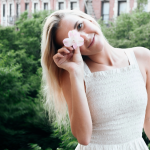